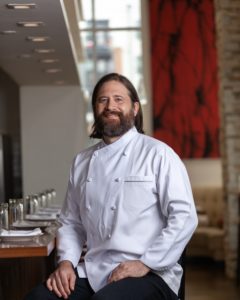 Chef Thomas Lucas began cooking as a teenager in his hometown of Chattanooga, Tennessee. He quickly recognized his love and passion for food and hospitality. With a desire to learn more, he moved to San Francisco to attend the California Culinary Academy.

Following graduation, Thomas remained on the west coast and began his culinary career at Michelin-rated restaurants including Rubicon and Murray Circle at Cavallo Point in the San Francisco Bay Area and Georges on the Cove in San Diego. That California flare shows up in Thomas’s devotion to local, seasonal ingredients attentively prepared.

After seven years honing his craft in California, Thomas moved back to the South to be closer to his family. After making a home for himself in Atlanta, Thomas joined Bacchanalia where he learned an uncomplicated style and approachable way of preparing food. During his time there he became sous chef and the opening executive chef of Star Provisions Cafe. Thomas has also worked in other highly respected restaurants in Atlanta including One Eared Stag, Cat Cora Kitchen and Atlas. Working again with an “old friend,” Jared Hucks, at The Alden, Thomas continues to share his craft to nurture and delight guests.