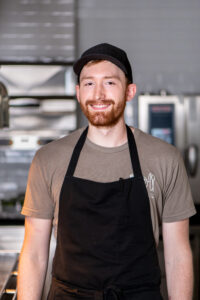 Jordan Michel Fabiano started his career cooking on the Atlanta Cousins Maine Lobster food truck at the age of 21. Through some stroke of luck he found himself in the center of a booming new food truck economy on (arguably) the most infamous truck franchise in town. With lines wrapping around every festival in Georgia (and demand growing), Jordan became a valuable asset to CML and The Atlanta Food Truck Coalition. Having cooked on eight different food trucks, including the two highest grossing taco trucks in Georgia (one of which was backed by Shark Tank), is a badge of honor he still wears to this day.

Unfortunately, winter always came for the food truck industry. During the off seasons, Jordan would bounce around town for the Metrotainment restaurant group playing many roles (sometimes all at once). This is where he first encountered real chefs. These people devoted their lives to the craft. They taught him everything they knew, and he listened. An open dialogue about food emerged, and he loved it.

After four years of going back and forth on the trucks, then to Hudson Grille or Hudson FC at night. He decided to commit to a management position at Metrotainment despite training in West Hollywood with Jim and Sabin Lomac to open their Lenox Mall brick and mortar as the kitchen manager. This move proved to be incredibly worthwhile because he found himself learning so much about both BOH and FOH operations. While at Metrotainment Jordan worked as a Sous Chef at Hudson grille Northpoint and Hudson FC. He also served a short term as the Executive Chef of Hudson Grille Brookhaven before moving to Einstein’s in Midtown to be the Sous Chef under Todd Webster.

One spring day, he and his (then) girlfriend, Lyndsey, ate at The Alden and everything changed. He realized he knew nothing and couldn’t deal. After about a year of having this strange feeling of singularity, he decided to act. He met with Jared and decided to drop everything for a commis position. Though moving his way around the kitchen was challenged by a pandemic, everything worked out with Jordan and the Alden. Now they are on their way to becoming old friends.